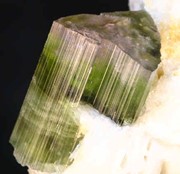 A member of the Tourmaline Group, Elbaite is named for the type locality at Fonte del Prete on Elba Island in Tuscany, Italy. Relatively common, Elbaite can be found of exceptional quality at its type locality, and in localities in Russia, Afghanistan, Pakistan, Madagascar, Mozambique, Namibia, the United States, and Brazil, among many other localities. It occurs in granite, granite pegmatite, metamorphic rocks, high-temperature hydrothermal veins, and as a detrital mineral in sediments. Elbaite is pyroelectric, generates a charge in response to heat, and piezoelectric, generates a charge in response to pressure.

Wisconsin is not known for its pegmatites, but they do occur. Much work has been done on this pegmatite field by Al Falster, Skip Simmons, and Karen Webster, known as the Hoskin Lake pegmatite field. There are over 200 highly evolved LCT-type pegmatites in the field. Although the host are Precambrian amphibolites and schists, the age of the pegmatites have not been determined.

It is assumed that this specimen is from the Hoskin Lake pegmatite field in Florence County. The specimen is composed of about 25% color zoned Elbaite to 2cm in a matrix of Microcline. It is just a good reference specimen for pegmatite study.

Here's a nice miniature group of green translucent Elbaite crystals with pink cores and a dark blue termination. The large crystal is terminated and a smaller crystal is broken off.

Purplish red rubellite, the pink variety of Elbaite. Rubellite contains about 3% rubidium and is commonly associated with the rare zeolite, Pollucite. Pollucite, the chief ore of cesium, contains about 43% cesium, although the content is not that high at Tanco.  Pollucite is a cesium zeolite found exclusively in pegmatites. Tanco is one of the largest and richest sources of Pollucite. Pollucite is used in electronics, drilling fluids, and in atomic clocks. It is usually associated with rubellite tourmaline and Lepidolite. The rubellite forms crystals in this specimen to 7mm. The Polluctite is colorless and can easily be mistaken for Quartz.

All of these specimens were collected by Dr. David London, during his study which eventually culminated in his amazing book "Pegmatites".

Group of six sub-parallel crytals of Elbaite with a deep pink color and light green tips. The terminations are frosted, capped, or etched. The longest crystal is 8.5cm long and has great luster and striations.