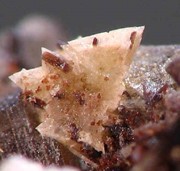 Named for Frederick August Ludwig Karl Wilhelm Genth, who was a German-American mineralogist who described a zinc-rich helvite that was later renamed genthelvite. It is an uncommon mineral, but widespread, and can be found in the United States, Canada, Norway, England, Scotland, Nigeria, Argentina, Greenland, Russia, and the region of Karelia. Genthelvite can fluoresce a bright green under long- and short-wave ultraviolet light and it is also phosphorescent.