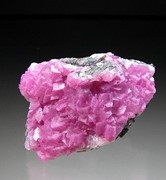 Dieudonne Sylvain Guy Tancrede de Gratet de Dolomieu is the namesake of Dolomite, a French geologist and naturalist who was a contributor to the earliest descriptions of the species found in dolostone. Dolomite is a common and major rock forming mineral and is abundant and widespread worldwide. A few localities noted for fine material include in Italy, Spain, Austria, Germany, Switzerland, Kosovo, England, Russia, Brazil, Mexico, and the United States. The origin of dolomite is still somewhat uncertain, but it believed to form via diagenesis or by hydrothermal metasomatisim of limestone. It is a primary phase in hypersaline sedimentary environments, is a major constituent of contact metamorphic rock and marbles in some cases, can be found as a gangue mineral in hydrothermal veins and can be found in carbonatites and ultramafic rocks. Dolomite can fluoresce white to pink under ultraviolet light and is triboluminescent.

Dolomite with a light lime green to yellow, an unusual color caused by a high Nickel content. The crystals covering the face are rosettes to 7mm and totally cover the matrix.

Dolomite from Tsumeb mine, Tsumeb, Namibia

Large curved saddle-like crystals of Dolomite to 2cm with a nice golden-yellow sheen.

Pink crystalline mass of Dolomite colored pink by cobalt. Dolomite formed an important constituent of the gangue rock at Tsumeb.  Other than some primary sulfides (linnaeite, glaucodot, carrollite), which are very rare, there are no important cobalt minerals at Tsumeb.

Pink rhombic crystals mostly to 3mm but also having larger 7mm crystals perched at the top.

White rhombic crystals to 5mm. Excellent clean specimen from this famous mine.

Creamy white crystal clusters to 1.5cm on Galena matrix with Sphalerite and Quartz.

Sharp creamy rhombic Dolomite crystals from 6 to 11mm on edge. One the crystals, as seen in the last photo, has a small black Sphalerite crystal at the center of a seemingly incomplete crystal of Dolomite.


This specimen has a large pocket lined with platy Hematite and water clear Quartz. The large white balls are aggregates of Dolomite to 1cm. Mineralogically, a simple specimen but naturally perfect with good contrast of white on black. Very hard to get any specimens from this long classic locality.

White Dolomite rhombs with a slight pink color to 4mm.