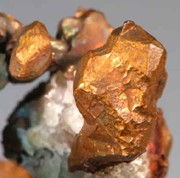 Origin of the name from the ancient copper mining on the island Cyprus, also called kyprios, which gave way to the Latin word cuprum, from which the elemental copper gets its chemical symbol Cu. Copper is widely distributed worldwide and can be found in large quantities in the United States, Namibia, as large crystals in Russia, Germany, as fine crystals in England, Wales, Chile, and Bolivia, among many other localities. Typically found as a hydrothermal mineral in mafic extrusives, sandstone, and shale where it formed in oxidizing conditions, as well as in oxidized, disseminated copper deposits via secondary processes, and can be found rarely in meteorites. A well known and telling property of copper is its high malleability and ductility. Copper exposed to the elements is often weathered and corroded to a green tarnish, called patina.

This specimen is an entanglement of arborescent growth Copper crystals. Each crystal is terminated nicely from elongated crystals. The matrix is partially composed of Calcite. It was said that a deficiency of Pyrite at Ajo prevented good secondary enrichment. But the upper levels were oxidized to carbonates without loss of much Copper.

Large Copper mass from amygdaloidal basalts. This specimen also contains a bit of Silver. Well over 6 million tons of native Copper has been mined from these deposits which stretch the entire length of upper Michigan from Wisconsin to Keweenaw point. The Copper occurs within open-space fillings and replacements in amygdaloidal flow tops of the Portage Lake Lava Series. These Copper deposits have been mined since prehistoric times.

Native Copper as well as thin plates of Copper along the bedding and finely disseminated Copper along bedding in black siltstone of the Nonesuch Formation which is of Upper Precambrian age. The copper deposits of the White Pine are stratifom and only moderately deformed. Two stages of mineralization have been introduced; an early Chalcocite replacement of syngenetic Pyrite and a later stage from Copper rich fluids. It is not clear to which stage these specimens belong. However, based upon the article in Rocks & Minerals (v. 74-3) by Tom Rosemeyer it is very possible it is from the first stage since the Copper occurs in thin sheets parallel to the bedding and not in the open fractures associated with the second stage.

Crystallized Copper with micro octahedral crystals with a peculiar brassy luster. Micro Bornite (?) crystals are sprinkled about the Copper.

Tiny Copper crystals throughout this specimen as well as Cuprite crystals. The Levant mine is one of the most famous mines in the world having been perched high on the cliffs above the Atlantic ocean. It was a major producer of copper and tin. Mine workings reached more than a mile out beneath the sea and to a dept of 2000 feet.

Copper included within Gypsum var. Selenite as dendritic growths throughout.

Native Copper to 1.5cm in Epidote from presumably from the Portage Lake volcanics of the upper Michigan Lake Superior district.

There are two large 1.5 to 2cm cubic crystals of Copper with Calcite. Most of the specimen is copper, either as crystals or as leaf/dendritic growths. An old-time specimen.

Calcite crystals from 1.5 to 2cm with included Copper. You can also see the Calcite is nestled nicely by the Copper.

A large hackly specimen of native Copper worked out of it's matrix of basalt and Epidote.

Hackly mass of Copper with conglomerate and a bit of Epidote.

Large specimen of arborescent Copper with two plates attaached to the host rock.

An excellent, waterclear, complex Calcite crystal with included Copper.  These are super hard to obtain these days. There is a slight ding less than 1mm near the tip of the Calcite crystal.