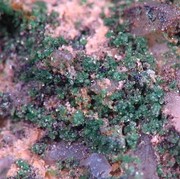 Named in honor of Richard Chenevix, an Irish chemist who was an early analyist of a Cornish copper-iron arsenate that was later shown to be Chenevixite. Chenevixite is an uncommon to rare mineral that finds its type locality and a few other localities in Cornwall, England, while additional localities include in the United States, Mexico, Chile, the Democratic Republic of the Congo, Australia, and several others. It can be found in oxidized hydrothermal polymetallic mineral deposits.