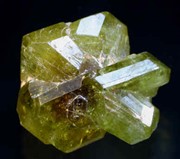 Named after the Greek word chryso, which means “golden,” in reference to the mineral’s typical color, and likely after the beryllium content of the mineral, although most sources will tell of it being named after the Greek beryllos, which means “beryl,” despite the fact that Chrysoberyl and beryl are two completely unrelated minerals. Chrysoberyl is an uncommon mineral, but widespread and notable localities include in Brazil, the Czech Republic, Russia, Madagascar, Zimbabwe, Sri Lanka, and the United States. Chrysoberyl can be found in granite pegmatites and as a detrital mineral.

Gorgeous, lustrous and gemmy, cyclic twinned Chyrsoberyl from the classic locality Espirito Santo. Nearly complete 360 twin not quite, instead has several other 1cm crystals attached.

Group of three cyclic-twin Chrysoberyl variety Alexandrite crystals to 1cm that are a nice grape-purple in the photos, but an equally beautiful green in person. The pleochroism is quite spectacular and we absolutely could not capture the green color on camera.