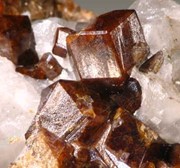 A member of the Garnet Group named for J.B. d’Andrada e Silva, a Brazilian mineralogist who was the first to describe a variety of this type of garnet. Andradite is common and widespread, and good material can be found in Italy, Romania, Switzerland, Norway, South Africa, Russia, the United States, and Mexico. Hundreds of other localities ate known. Andradite occurs “in skarns from contact metamorphosed impure limestones or calcic igneous rocks, in chlorite schists and serpentinites, [and] in alkalic igneous rocks, [where there are] then typically titaniferous. Associated minerals include vesuvianite, chlorite, epidote, spinel, calcite, dolomite, and magnetite.

Beautiful yellow-brown Andradite variety Topazolite crystals from 2-5mm on all sides of matrix.

The varietal name refers to resemblance of these Garnets to Topaz, which indeed they do have that same nice clear color and adamantine luster.

Deep red well-formed garnets to nearly 2cm on quartz with many others.