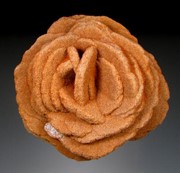 Still commonly spelled barite, although officially spelled Baryte, this mineral is named for the Greek words barys or baros, meaning “heavy” or “weight,” respectively, in reference to the mineral’s high specific gravity. Baryte is the most common barium mineral and can be found as a gangue mineral in hydrothermal veins, in residual weathered barite-bearing limestone deposits, as an accessory in igneous rocks, in carbonatites, and as a primary constituent of submarine volcanogenic massive sulfide deposits and sea-floor chimneys. There are thousands of localities for Baryte worldwide. Can be thermoluminescent, and may fluoresce and phosphoresce a cream color to various spectral colors under ultraviolet light.

This occurence is one of the more unique localities for the oddities of mineral world. Here barium mineralization penetrated the Permian Garber Sandstone along fractures sets and formed rose-like clusters of Baryte (Barite) crystals. Individual crystals form saucer shaped crystals with sand inclucions from the the Graber Sandstone. Individual crystals in this cluster are 1 to 2cm across. Trace Hematite imparts the red coloration. This specimen is from Dr. David London's collection, who wrote a thorough article on this occurence in the July/August 2008 issue of the Mineralogical Record.

This specimen was photographed for London't article on page 281, figure 8.

An "American Classic", Barite from SOuth Dakota is some of the best in the world. Crystals on these specimens average 4 to 6cm along the c-axis.

The photos speak for themselves on this specimen. I liken it to a waterfall of blue baryte cascading over the edge. I can't imagine how this formed, other than under ideal conditions. The crystals are the most basic forms of Baryte which are tabular with slight elongations on the a or b axis with the sharp corner pointed parallel along the lines of formation but with a divergent habit. Look at the photo, you'll see what I mean. Incredible piece. No damage, sits nice with a light blue color with some frosted white areas.

White, elongated tabular crystals of Baryte to 4cm in a nice divergent group. Excellent specimen. The terminastions are lustrous and smoth as opposed to the remainder of the crystal which is a frosted white. There is one broken off crystal, which technically is on the back side opposite of the display side.

Tabular groups of Baryte deposited on the top of yellow Calcite.

Tabular crystals as singles and fans to over 1cm.

Colorless tabular crystals of Barite to 6mm with scattered reddish brown strands and bundles of Inesite.

Baryte from Tsumeb mine, Tsumeb, Namibia

Barytee is rare from Tsumeb, especially in nice golden crytsals such as this. The crystals are thick tabular to 15 x 7mm.

Light golden yellow tabular crystals, the largest to 2.5cm across.

A group of thin platy colorless to white Baryte.

This is a kind of cloudy grey thick tabular crystal. The largest crystal is 3.5cm.

This locality is famous for waterclear prismatic crystals such as these. This specimen shows excellent crystals to 2cm.

A large white to murky light gray rhombic crystal of Baryte. This find was made sometime around 1998 and sometimes occured with Miargyrite and Pyrrhotite.

Tabular crystals to 1.5cm of Baryte with color zones.

This is a big hunker of a Baryte crystal. It is a single, long tabular crystal with three prism faces beveling the sides and two pinacoidal faces closing the prism in the a and b axial directions. The c-axis is terminated by two pyramidal faces. One end is terminated the other is a broken end. Impressive and good for teaching or excersising your biceps.

A large and heavy specimen of nicely crystallized blue Baryte with a tan outer coating on most crystals but not all. The are crystals (up to 3cm) are large and perfectly terminated showing excellent orthorhombic forms.

A cabinet specimen from this obscur locality with 1-4mm golden tabular crystals across face.