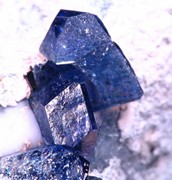 Named after the type locality at the Dallas Gem mine in San Benito County in California, USA. Other localities for Benitoite include additional USA localities, as well as in Japan, Australia, and the Czech Republic. At the type locality it can be found in natrolite veins that cut glaucophane schist in a serpentine body, and at the Japanese locality in a magnesio-riebeckite-quartz-phlogopite-albite dike that cuts serpentinite. Benitoite has a blue fluorescence under short wave ultraviolet light and an intense blue cathodoluminescence.

Eight glassy, deep blue and highly lustrous Benitoite crystals, the largest to 8mm. There are numerous smaller crystals all equally gemmy. A few of the crystals have forms beyond that of the ordinary, but still complicated ditrigonal dipyramidal crystals. Also associated are a few micro Joaquinite crystals and a Neptunite crystal to 1.2cm.

One sharp well-formed kind of gemmy crystal to 1mm surrounded by a lot of Neptunite.