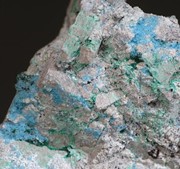 Named as a member of the bastnasite species which are in turn named for the original locality at the Bastnas mines in Vastmanland, Sweden and for the dominance of lanthanum over the other rare earth elements in the composition. Basnasite-La is a rare mineral that occurs in late ankerite carbonatites at its type locality in the Belaya Zima REE-Nb deposit in Russia. Additional localities include in Pakistan, Madagascar, Malawi, Nigeria, South Africa, South Korea, Australia, the United States, Germany, Greece, and Sweden.

Crusts of minute blue globules on matrix with malachite.