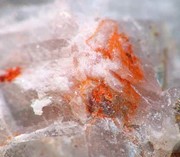 Named after Professor James Edwin Hawley, a Canadian mineralogist at Queen’s University in Kingston, Ontario. Hawleyite is a widespread but uncommon mineral and can be found in localities in Canada, the United States, the Czech Republic, Spain, Greece, Ireland, England, Russia, New Zealand, Chile, India and others. As Hawleyite is easily confused with greenockite, it is likely that there are other localities that have not been discovered as bearing Hawleyite yet. Fairly rare alteration product associated within fractures or in direct association with cadmium rich Sphalerite or other cadmium rich sulfides. Occurs as a fine, earthy, pulverulent bright orange to yellow coating.