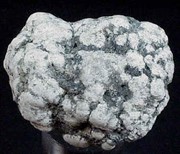 Named after its formation as a secondary mineral from earlier phosphates after the Greek word diadochos, meaning “successor.” Diadoshite is an uncommon mineral that may be post-mine in origin and can be found in gossans and coal deposits formed from sulfate rich solutions, as well as in caves with the phosphate derived from guano, and in granite pegmatites. Localities for Diadochite include in Germany, Belgium, the Czech Republic, France, Slovakia, Austria, Canada, and in the USA including here in the Black Hills of South Dakota in the Tip Top and Big Chief mines. Other additional localities are known.