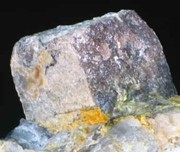 Named for the Andalusia region of Spain, where a few localities for Andalusite lie, however none of these localities is the type locality for the mineral which actually lies in the Castile-La Mancha region of Spain.  A common and widespread mineral, additional localities can be found in Austria, Germany, the United States including here in the Black Hills of South Dakota at several mines, Australia, Sri Lanka, and Brazil, among several others. Andalusite forms as “a result of contact metamorphism of argillaceous sediments, [and] also in regionally metamorphosed schists. [It is] rare in granites and granite pegmatites, which, however, afford the largest crystals.” It can also be found as a detrital mineral in some sandstone.

Chiastolite is a variety of Andalusite containg graphite inclusions giving it the cross patterns. As the Andalusite forms during metamorphism, the graphite aligns in cross-shaped patterns. Indeed this specimen consist of mostly graphitic schist.

This specimen was aquired by Hampson in 1944. The cross-sections are polished cuts in the andalusite to expose the crystals.

I have never seen chiastolites this large before and there is not any information on them. It is a very unique large example of Andalusite, variety chiastolite. Chiastolite is a mineralogical phenomenon, when carbon particles are concentrated between opposing crystals resulting in a cross-shaped pattern while Andalusite is forming during metamorphism.