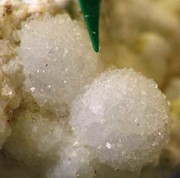 Previously called "Herschelite" until it was renamed in the late 1990's, and is now named after the Greek chabazios, which was an ancient name of a stone. Chabazite is an uncommon mineral, but a common Zeolite with many widespread localities including notable localities like the type locality on the slopes of Mt. Etna in Sicily, Italy, at Horseshoe Dam and near Bowie in Arizona, at Boron in California, USA, in the Steinberg quarry in Austria, at Hayata in Japan, at Richmond near Melbourne in Australia, and at Tokatoa on the North Island of New Zealand. At the type locality it is found in vugs of lava rocks, and from basalts and underlying borates in Californa, USA. Glassy spherical crytsal aggregates. Part of the Zeolite group.

Previously called "Herschelite" until it was renamed in the late 1990's. Forming glassy spherical crytal aggregates to 3mm across on white Phillipsite.