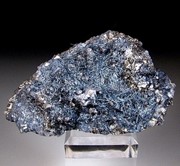 Named for Charles Louis Boulanger, the French mining engineer who was the first to call the species to attention. Boulangerite is relatively common and widespread, and can be found in medium to high-temperature hydrothermal veins. Some of the many localities include in France, Italy, Sweden, Germany, Serbia, the Czech Republic, the United States, Mexico, and Canada. Minerals associated with Boulangerite include lead sulfosalts, galena, stibnite, sphalerite, pyrite, arsenopyrite, siderite, and quartz. Sometimes easily confused with jamesonite.

Nice miniature with a nest of Boulangerite crystals covering the face in a 3.5 x 3cm area. Also shows some Chalcopyrite crystals to 6mm and Siderite or Dolomite in association.

Steely gray needles of Boulangerite in bunches to 1cm.