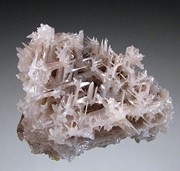 Named for the Latin cerussa, or ceruse, which means “white powder,” in reference to the mineral being known as white lead ore, which, when powdered, was used as “white lead,” a formerly common (at least in the West) lead pigment in paint and cosmetics. Cerussite is a relatively common and widespread mineral and can be found in oxidized lead deposits where it can, on occasion, be an important ore. Localities for fine Cerussite crystals include in Germany, the Czech Republic, Slovenia, Scotland, England, France, Italy, Russia, Tunisia, Morocco, Namibia, Iran, Australia, and the United States. Cerussite can fluoresce yellow under long-wave ultraviolet light. Occurs in many habits, commonly as colorless, twinned and with a distinct adamantine luster. Often as white with "jackstraw" habit. Associations with Galena and other secondary minerals are key to identification. Tabular or elongated colorless, white, pale yellow, smoky, dark gray, or black crystals. Also in granular, crumbly, stalactitc, prismatic aggregate, and massive forms.

Delicate white prismatic crystals to over 1cm. This habit is termed "Jack Straw".

Translucent, hemimorphic and twinned Cerussite crystals to 5mm on a Galena and hard shale matrix.

Cerussite from Tsumeb mine, Tsumeb, Namibia