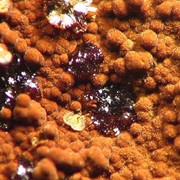 This mineral is a close kin to Whitmoreite, containing Mn2+ substituting for the Fe2+ and forming Earlshannonite as flattened, thick, prismatic(?) crystals in clusters to about 0.5mm on dark green Mitridatite