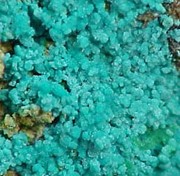 Named for its place in the monoclinic crystal system and for the relationship to the mineral tyrolite, which at the time was believed to be in the orthorhombic system. As tyrolite has since been found to also be monoclinic, the status of clinotyrolite is currently unclear. Flat, elongate, emerald-green crystals in radiated and foliated aggregates. Commonly found in the oxidized zone of copper deposits, Clinotryolite can be found in localities in the USA, China, Germany, France, and Ireland, among several others.