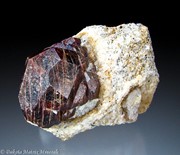 Named after a corruption of the word alabandicus, which was used to describe stones, likely Almandine, that were found or worked on at the ancient gem cutting center in Alabanda, Turkey, which is also considered the type locality. Almandine is the most common garnet and can be found in hundreds of widespread localities around the world including as fine crystals in localities in Austria, Sweden, Norway, the United States, Brazil, Zimbabwe, Australia, and Japan. Generally found in schist and gneiss that formed from regionally metamorphosed argillaceous sediment and pelites, but can also be found in contact metamorphic hornfels, granites, eclogites, sedimentary rock, and as a detrital mineral.

This is a well known classic Nevadan locality which has produced some of the best Almandine garnets around. These pieces contains a deep ruby red euhedral Alamandine crystal to 1.5cm in rhyolite.