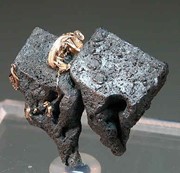 
Old specimen with an inked label. This specimen is loaded with cubic, dull silvery Acanthite crystals throughout the brecciated matrix. The largest crystal is 5mm across with dozens smaller. Excellent older specimen from this classic locality.

Numerous well-formed Acanthite crystals in singles and clusters from 2-3.5mm. This is simply a superb specimen not only for the region but also for its crystals.

A small specimen with two very nice crystals of Acantite, the largest to 5mm. Classic locality.


A 5mm cube of Acanthite in matrix with some Silver. There are several other smaller crystals of Acanthite not shown.

Acanthite on Silver from O'Brien mine, Cobalt, Ontario, Canada


The specimen is mostly a solid leaf of Silver with a coating of Acanthite. This has good provenance with an old inked label stuck on the specimen and dated 1980. With it is a nice large label from the "Department of Mines Geological Survey" of Canada with a number matching the specimen (7720).

Cubes of Acanthite from 1-3mm all over matrix.

Soft, sectile mass of Acanthite with many crude forms of cubic crystals. The cluster at the tip is 7mm across. The specimen comes from the historic cobalt/silver Keeley-Frontier mine located in one of the largest silver mining districts in the world. The mine produced an incredible 3.3 million pounds of cobalt and 19.1 million ounce of silver. There is associated Calcite in mass and as crystals, a clear indication that the specimen was never etched.

Excellnet thumbnail of Acanthite with superb cubic crystals to 2.5mm.

An old-timer of Acanthite with Silver. The Acanthite measures 7mm. The Silver is all over the specimen, but the best are two wires to 1-2mm around the Acanthite. Acanthite of this size are generally not seen from Batopilas.