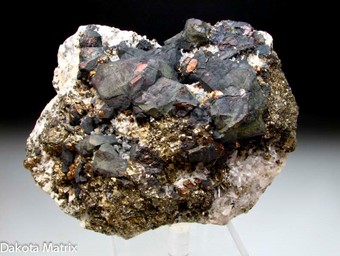 
A superb cabinet specimen with large Bornite crystals to 2.5cm. The crystals, for the species and the locality, are quite distinct but rounded and is typical of Butte. Large Bornite crystals such as these are found in very few places in the world. Butte and Dzhezkazgan mine in Kazakhstan are perhaps the largest. Bristol and Cornwall produced probably the best defined crystals. Butte is still one the most sought after localities for Bornite crystals.

Amongst the Bornite crystals are tiny blue Fluorapatite crystals. Pyrite is also present. 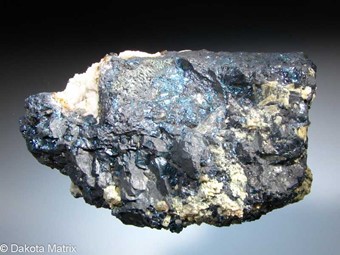 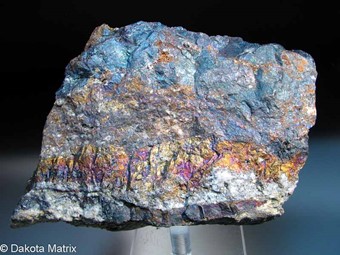 
A large specimen with colorful hues of iridescent purples, blues, and gold of Bornite. 1 lb 12oz. sawed on one side showing mineralization textures. 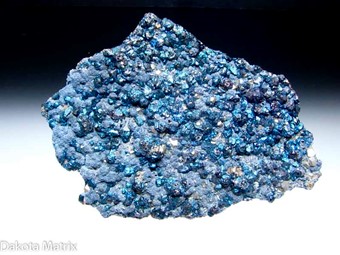 
Blue iridescent good crystals to 3mm across face of thin plate. It is associated with micro crystals of Chalcocite, deep red Sphalerite, and Pyrite. There is coverage on the backside, though much smaller crystals. 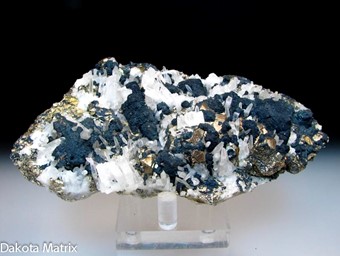 
A plate full of dark bluish to almost black virtually formless crystal masses of Bronite with Pyrite and Quartz. Like the Comstock and the Homestake mines, specimens are scarce from Butte. 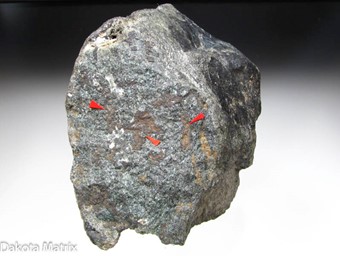 
On the side of this specimen is what looks like sheet Silver. After poking and scratching at this stuff, it obvious it was not. But I had no idea what it was as it carried a tarnish and was goldish iridescence in places. EDS has shown it to be Bornite, with much more Copper than Iron. I can't rule out Chalcopyrite though, since it carries that goldish color. There is also Magnetite in the green, chloritic schist.