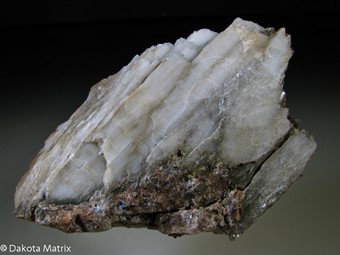 
Lithiophilite  occurs in lithium and phosphate rich pegmatites. A complete series exists between end members triphylite and lithiophilite. Essentially the composition of either two will contain certain amounts of iron and manganese and thus the formula is Li(Mn,Fe)(PO)4. Triphylite is the ferrous iron end member, while lithiophilite is the ferrous manganese end member. Ferrous iron and manganese are important here since this tells you that the two end members are essentially non-oxidized and therefore probably primary (i.e. unaltered by metasomatic reactions).  Moore, in the MR issue (May/June 1973) authored a fascinating paper titled “Pegmatite Phosphates”. In this paper Moore explains the solid solution series of triphylite-lithiophilite. Lithiophilite end member occurs less frequently than triphylite since there is usually an abundance of iron in solution. However, as Moore explains, if lithiophilite occurs in a pegmatite it is not always safe to assume that the original pegmatite was iron deficient. Rather it is possible that the iron may have been consumed by other minerals namely schorl tourmaline.

This specimen, I believe, was once in Dr. Paul Moore’s collection. The number on the specimen corresponds to the label. The specimen itself is beautiful off-white cleavable mass. Moore's original tag shows this to be from the "Newry Mine". I am assuming this to be equivalent to the Nevel Mine listed on Mindat. Anyhone: please correct me if this is an erroneous assumption. 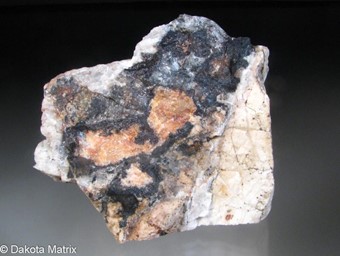 
Pink compact massive mineral. This is an old David Shannon stock specimen in which he states that the Lithiophillite is a very pure Mn end member.

This mine is located in the White Picacho district of the Wickenburg Mountains of Maricopa and Yavapai Counties. The district lies in what Richard Jahns refered to as the Arizona Pegmatite Belt which trends in a northwesterly direction south of and adjacent to the Colorado Plateau. Please refer to the Univ. of Arizona Bulletin No. 162 "Pegmatite Deposits of the White Picacho District" published in 1952.

Both Jahns and David London have done much work on these pegmatites. The pegmatites are basically lithium rich and yield secondary phosphate minerals from lithiophilite. 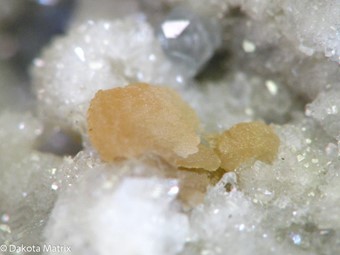