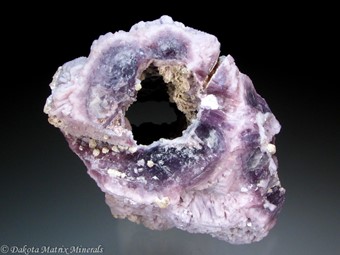 
This is a really neat and interesting piece with two hollow epimorph tubes of crystalline purple micaceous Lepidolite. Apparently there were Elbaite (or another slender prismatic mineral) that were partially covered by the Lepidolite and when the Elbaite dissolved out (or however it dissapeared) the Lepidolite remained with empty holes. 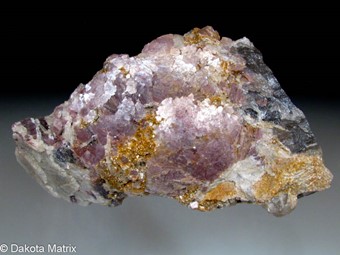 "Lepidolite" was actually discredited as a unique mineral species. It is rather a "catch-all" name describing purple or lilac colored Muscovites belonging to the solid solution group of Polylithionite - Trilithionite, which are lithium rich micas. Lepidolite is often found in LCT (lithium - cesium - tantalum) pegmatites and can often be enriched in rubidium.

This particular habit of Lepidolite is often described as "ball-peen" Lepidolite for its similarity to the ball-peen hammer. David London describes this habit in his book "Pegmatites" and again sites differential or rapid growth in the constantly evolving chemical environment. 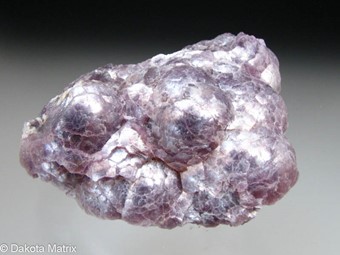 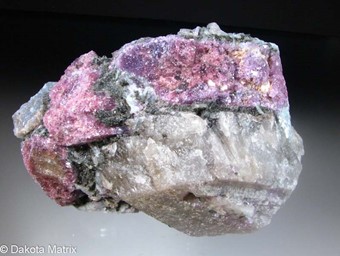 
An excellent example of selective replacement often seen in pegmatites. In this case Lepidolite has almost totally replaced only the core of tourmaline and left behind the out rim. 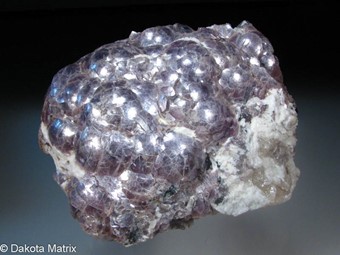 
Lilac "Lepidolite" forming rounded crystals often refered to as "ball-peen" Lepidolite. Nearly the entire specimen is composed of Lepidolite. Lepidolite is a lithium rich mica falling withing the solid solution of polylithionite - trilithionite. Evidently, according to Dr. David London, the lilac or purple color is not due to the presence of lithium but due to the presence of minor manganese. Lepidolite is found chiefly in pegmaties but not exclusive to pegmatites.

Noteworthy to mention is the fact that not all purple micas are lepidolites! 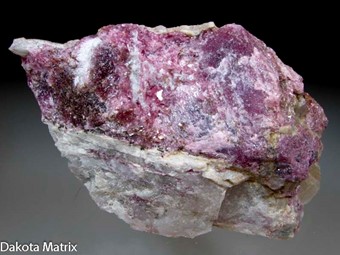 All of the Lepidolites in this Daily Five are from the Dr. David London collection. London wrote the book "Pegmatites", and is considered an authority on the formation of these interesting and incredibly mineralized geologic deposits.