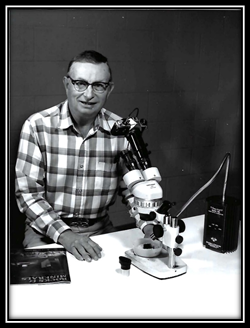 Dakota Matrix Minerals is honored to have obtained the collection of Arnold G. Hampson of Dolores, Colorado. Mr. Hampson passed away in 2011 taking a lifetime of mineralogical knowledge with him. Fortunately for all mineral collectors, Hampson was well published and assembled a significant collection of East Coast and Colorado Plateau mineral specimens. His micromount collection of 8,400 mounts was donated to the Colorado School of Mines. In September of 2019, we acquired his display and systematic collection, along with hundreds of field-collected flats and delivered it to Rapid City, South Dakota.

Like many mineral collectors, Arnold began collecting minerals at a young age. He was eleven years old, and the curiosity and lure of minerals grew into a lifelong hobby.   He grew up in Rhode Island near many fascinating mineral localities.  In the summer of 1944, at 15 years old, he and a friend hopped on their bicycles and took a two-month collecting expedition in the northeastern United States, where they visited mines and explored historic spots along the way.  During their 2,600-mile journey, they shipped their mineral treasures home.  The trip took them along the Atlantic Coast to Maine, then across the White, Green and Adirondack Mountains to the St. Lawrence Valley. Not yet tired of riding their bikes and seeing more localities the two kids entered Canada and rode to Ottawa, then onward to Lake Ontario, Toronto and Niagara Falls.  Crossing back into the States, they rode into western New York through the mountainous northern Susquehanna River valley and then to Pennsylvania, Maryland, and Delaware. They finally turned their bikes back north and completed their loop through Philadelphia and eventually home. Not too many of us who collect minerals can say they took this long of a bike trip solely for minerals!  In fact, Arnold guessed that while in High School, he probably rode his bicycle 10,000 miles on his mineral adventures. That must have been some bike, especially since they carried 35 pounds of equipment on their “light-weight” English bicycles!  Recall in those days' bikes did not have gears. 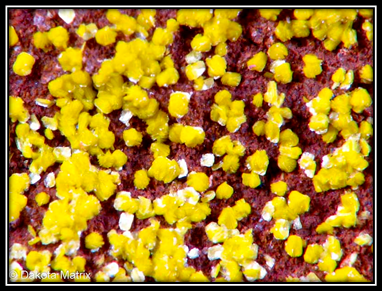 Three years later in 1946, and now with thighs the size of a power lifter from that bike trip, Arnold and a friend embarked upon an 11,000-mile mineral collecting trip in a 1935 Ford. This was the summer just after high school and right before attending the Colorado School of Mines. 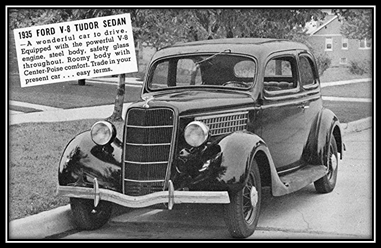 This mineral collecting trip began in Connecticut and took a giant, national loop through North Carolina, Arkansas, Oklahoma, New Mexico, Arizona, and California where they traveled north through Oregon and Washington.  They started heading east through Idaho, Montana, and the Black Hills of South Dakota. Knowing that there was not much for mineral collecting east of the Black Hills, they motored on to the copper mines of upper Michigan. After this, they then crossed the border into Ontario, Canada and finally back into the US via New York.

Never spending more than two days at any location, Arnold and friend visited no less than 200 localities throughout the country. His specimens were shipped home along the way, while he recorded all the relevant information in a series of small black notebooks. The specimens added to his master collection were later numbered and carefully labeled to the corresponding number in the notebooks. He began this practice in May of 1940, when he was only 12 years old. What was specimen number one? What else – Quartz(!) from Eagle Bridge, NY.

While reviewing his catalogs, we were astounded to learn what a monumental trip this was. Consider your resources in 1946: maps were not easily obtained, let alone connections to the mines; one had to have knowledge of were the gas stations were located prior to a day’s drive; there were no Interstates and no mini-marts for food; his car, a 1935 Ford, surely had problems along the way with flat tires, overheating, and of course had no air-conditioning. This trip was nothing less than amazing. We chronicled the major localities below, keeping in mind that these stops were just the highlights. 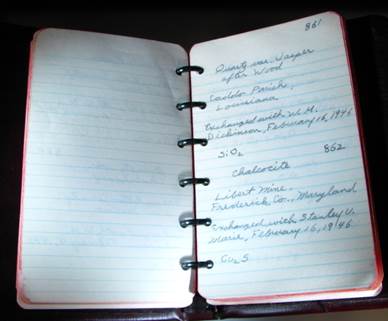 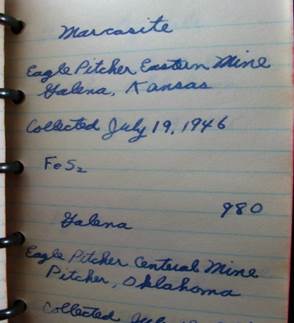 Attending the Colorado School of Mines, Arnold graduated as a Geological Engineer and worked in Canada for several years. In 1955, now married to Carrie, they relocated to the prime mineral collecting area of southwestern Colorado and lived their remaining lives in Dolores. Arnold and Carrie explored numerous localities of the Telluride, Ouray, and Silverton districts, and the greater area of the San Juan Mountains including the Bessie G, Longfellow, Eagle, and Sunnyside mines to name just a few. Arnold took his collection seriously and rose to the level of publishing and displaying his minerals at the larger shows in the US. A few of his publications are listed below: 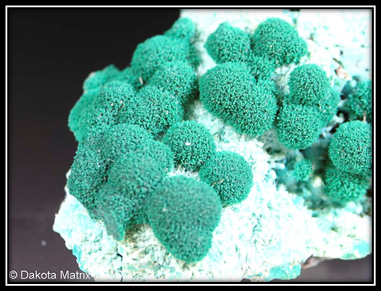 In 1968, Arnold began collecting and mounting micro minerals.  He demonstrated extraordinary skill in micromounting and most often mounted the minerals on cactus needles.  In 1989 Tom Rosemeyer interviewed Arnold Hampson for the column in Rock and Minerals “Through the Scope” (Vol. 64, Nov/Dec). 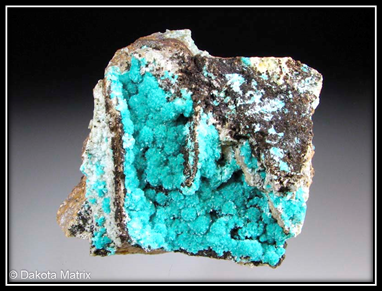 His professional career began as a graduate of the Colorado School of Mines in Golden, where he was awarded a PhD in geology. He was a registered professional engineer in five states and worked in the construction industry for 47 years as a chief and project engineer on major highway projects, power plants, and dams. Prior to engineering school, he served three years in the Rhode Island State Guard Reserve.

Arnold and his sweetheart Carrie enjoyed attending mineral shows where they frequently displayed his wonderful Colorado mineral collection.  He received numerous 1st place awards for “best of show” at important venues such as the Tucson and Denver shows, the Colorado Federation, and the Rocky Mountain Federation shows. 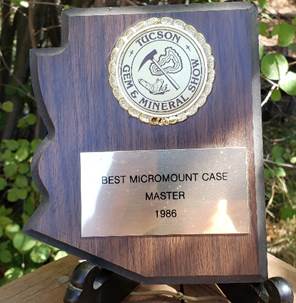 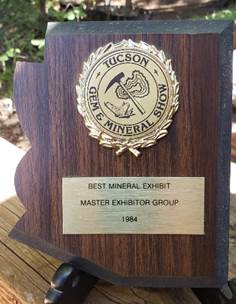 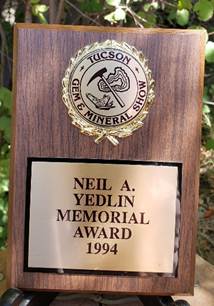 His collection spanned 70 years, 42 of these on perfecting micromounting. He cataloged over 3,000 specimens and 8,400 micromounts, gave talks, wrote papers, drove tens of thousands of miles to collect minerals, climbed mountains over 13,000 ft, and hauled thousands of pounds home all for the science of mineralogy. Arnold’s most prominent award was received posthumously and accepted by his wife Carrie, when he was inducted into the Micromounter’s Hall of Fame in 2012. Carrie stated that “minerals were his life” and he would have loved to have been able to accept the award himself. She knows he would have had a mineral “side-trip” planned along the way. 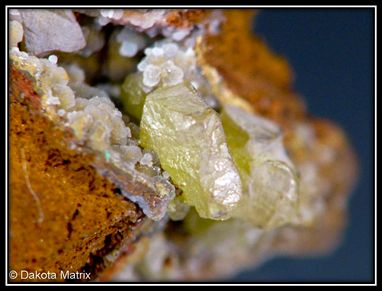 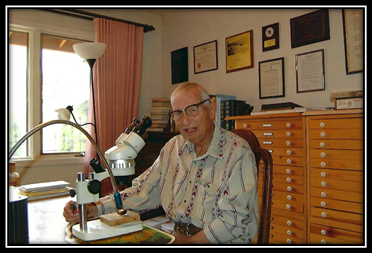 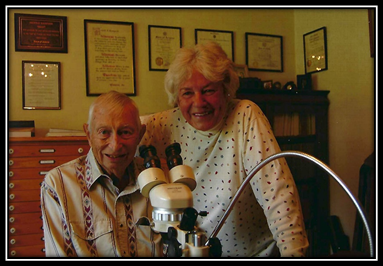 Arnold G. Hampson’s legacy will forever be appreciated through his mineral collection and his contributions to mineralogy. A special thank you to the Hampson family. Our gratitude is forever. We can only hope that you will be delighted to watch your father’s passion spread the world over to be admired by thousands of collectors.